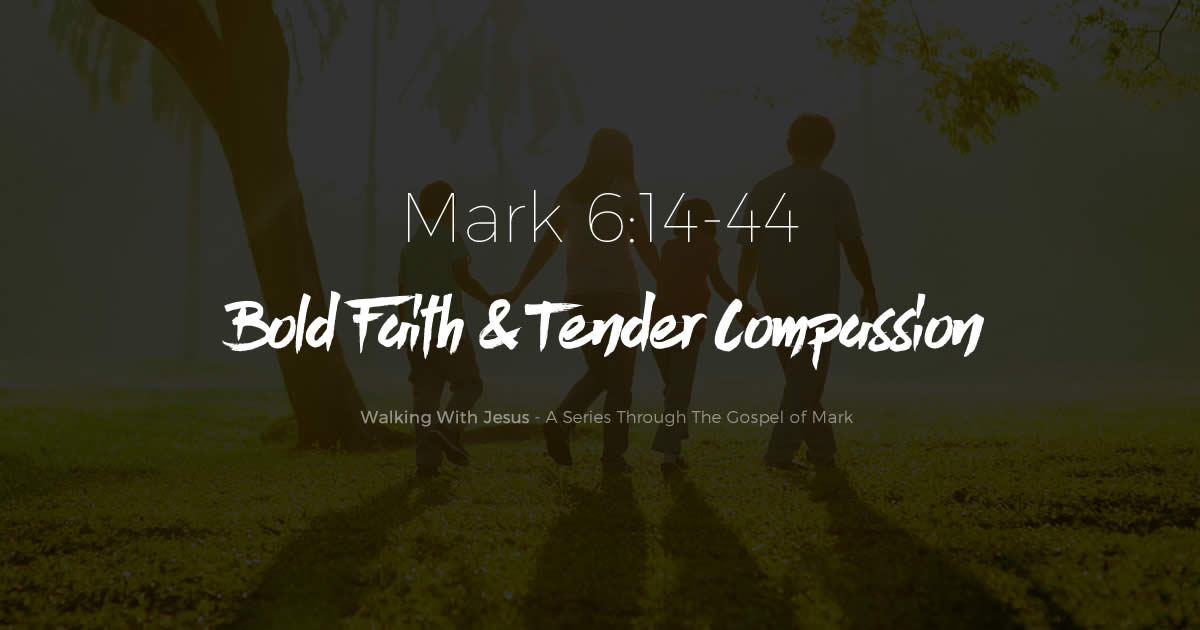 In Mark 6:14-44 we read about the weak leadership of Herod Antipas, the bold faith of John the Baptist, and the tender compassion of Jesus as He fed over 5000 men the word of God, and then turned 5 loaves and two fish into enough food for everyone.

14 Now King Herod heard of Him, for His name had become well known. And he said, "John the Baptist is risen from the dead, and therefore these powers are at work in him." 15 Others said, "It is Elijah." And others said, "It is the Prophet, or like one of the prophets." 16 But when Herod heard, he said, "This is John, whom I beheaded; he has been raised from the dead!" 17 For Herod himself had sent and laid hold of John, and bound him in prison for the sake of Herodias, his brother Philip's wife; for he had married her. 18 For John had said to Herod, "It is not lawful for you to have your brother's wife." 19 Therefore Herodias held it against him and wanted to kill him, but she could not; 20 for Herod feared John, knowing that he was a just and holy man, and he protected him. And when he heard him, he did many things, and heard him gladly. 21

Then an opportune day came when Herod on his birthday gave a feast for his nobles, the high officers, and the chief men of Galilee. 22 And when Herodias' daughter herself came in and danced, and pleased Herod and those who sat with him, the king said to the girl, "Ask me whatever you want, and I will give it to you." 23 He also swore to her, "Whatever you ask me, I will give you, up to half of my kingdom." 24 So she went out and said to her mother, "What shall I ask?" And she said, "The head of John the Baptist!" 25 Immediately she came in with haste to the king and asked, saying, "I want you to give me at once the head of John the Baptist on a platter." 26 And the king was exceedingly sorry; yet, because of the oaths and because of those who sat with him, he did not want to refuse her. 27 Immediately the king sent an executioner and commanded his head to be brought. And he went and beheaded him in prison, 28 brought his head on a platter, and gave it to the girl; and the girl gave it to her mother. 29 When his disciples heard of it, they came and took away his corpse and laid it in a tomb.

30 Then the apostles gathered to Jesus and told Him all things, both what they had done and what they had taught. 31 And He said to them, "Come aside by yourselves to a deserted place and rest a while." For there were many coming and going, and they did not even have time to eat. 32 So they departed to a deserted place in the boat by themselves. 33 But the multitudes saw them departing, and many knew Him and ran there on foot from all the cities. They arrived before them and came together to Him. 34 And Jesus, when He came out, saw a great multitude and was moved with compassion for them, because they were like sheep not having a shepherd. So He began to teach them many things.

35 When the day was now far spent, His disciples came to Him and said, "This is a deserted place, and already the hour is late. 36 Send them away, that they may go into the surrounding country and villages and buy themselves bread; for they have nothing to eat." 37 But He answered and said to them, "You give them something to eat." And they said to Him, "Shall we go and buy two hundred denarii worth of bread and give them something to eat?" 38 But He said to them, "How many loaves do you have? Go and see." And when they found out they said, "Five, and two fish."

39 Then He commanded them to make them all sit down in groups on the green grass. 40 So they sat down in ranks, in hundreds and in fifties. 41 And when He had taken the five loaves and the two fish, He looked up to heaven, blessed and broke the loaves, and gave them to His disciples to set before them; and the two fish He divided among them all. 42 So they all ate and were filled. 43 And they took up twelve baskets full of fragments and of the fish. 44 Now those who had eaten the loaves were about five thousand men.

Topics: Feeding the 5000, Jesus, John The Baptist
« Step Out in Faith & Do Not Fear Rejection We Are Never Alone »